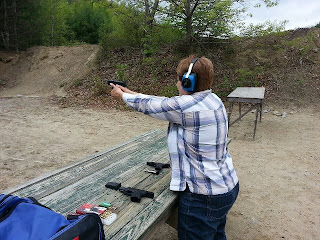 For this Mother's Day, I asked my son to take me shooting. I know he has guns, and I learned he belongs to a gun club. I had a boyfriend in North Haven, Maine, who showed me how much fun shooting rifles is. When Chris was seven, we lived with a man in Shreveport, Louisiana, who taught us to shoot and all about gun safety. So, in a way, I introduced him to guns long ago. I find this amusing, since I tried very hard when he was little to avoid introducing him to violence at any level. I never bought him toy guns or let him watch cowboy or war movies. But, I also learned, that when I wasn't looking, he made guns out of sticks all on his own. I think testosterone is to blame.

Anyway, now that he is an adult, I have been trying to think of ways to spend time with my son that will remind us both that we can still have fun together. Life does not have to just be about discussing feelings or relationships; sitting around eating and drinking. I wanted to do something this year. Something fun; just me and my only son. So he took me shooting. 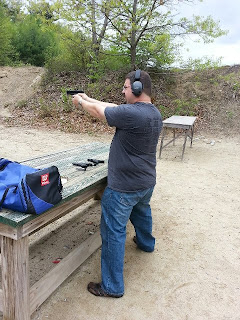 I was so impressed with his knowledge of guns and gun safety. He is totally a safety guy. I was so happy about this. I assumed it, but saw him step back as he constantly had to remind me to, "take your finger off the trigger when you're not shooting!" What I was reminded about was that I did grow up seeing guns on television. I always watched cowboy and World War II movies. I loved them! But, killings never included blood. Today's TV and movie shows need blood to sell tickets or improve ratings. I hate that, but I have become numb to it. I can tolerate it as part of a good story. I expect it now.

But, when shooting real guns, one has to really concentrate very hard on the fact that the gun in my hand is a weapon not a toy. I waved it around like a little kid, not thinking. My son constantly reminded me to point it away. I knew that; I just forgot. After several times reminding me about keeping my finger away from the trigger when not shooting, I finally got it and stopped doing that on my own. But, I was reminded once again, just like those days in Maine, that it is easy to forget that the firearm in my hand can kill if I'm not careful. It is really not a toy.

I then became, once again, sensitive to the fact that young people who think guns are cool or gang members who find power in owning a gun, must logically know that guns are weapons that can kill, mame or severely injure a living being. But, what is required to fully respect the power associated with owning or carrying a firearm is respect for it. Respect for its power and respect for life. Many people who seek to use guns as a form of power because they feel powerless, have little respect for life, in general. Therein lies the real problem. Guns are cool. They are fun to shoot. I really like it. But I respect life. So does my son. As we collected all the brass spent shells to dispose of in the white bucket for recycling, I was also reminded of the times I made my son help me clean up the trash left by inconsiderate visitors around trash cans at the duck-feeding pond when he was little, and to recycle. He hated it, but here he was guiding me to do just that with the shells. I felt proud once more. 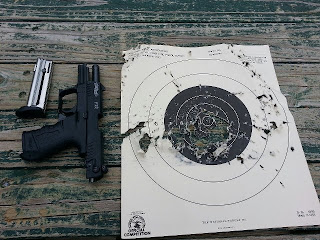 In a fearful world where we humans are taught that we require protection from unknown enemies foreign and domestic, that fear forces some of us to seek the comfort of owning and/or carrying a gun. I personally don't share that fear, and frankly, refuse to allow our government or the news media to force that fear into my own psyche. But I know my son has that fear, and it is real. He feels the need to protect himself, while enjoying the satisfaction that comes from hitting the target and knocking it down, hitting the bull's eye in the center, or shredding it like I did. There is real satisfaction in that accomplishment, and it is fun.

I am not afraid of guns. But their loud noises, and powerful kicks when shot remind me that they are weapons and not toys. If I have to be reminded of this, then I can't be the only one. Who reminds those young people of this fact? Maybe some of them just don't care. Therein lies the real problem. It's not owning the gun that is a concern, it's how you view its use. Target shooting is really fun. But the target should always be paper or steel. I do not believe in war, and pray that someday love will win out. I am a believer in Peace and Love. But I understand the fear that requires some to need to get, have or own a gun. It's that fear we need to address.

Addressing the fear that drives human behavior is very complicated, and cannot be legislated. But in the end, someone has to positively guide that testosterone into more healthy forms of dealing with fear than war and killing. Females have testosterone in our systems too. It's not just about male behavior. It's about fear controlling that behavior. It really does "take a village" to raise a child, to have compassion for the fearful, and to work together as a human society to figure out how to reverse the hold fear has on us. This re-sublimation of our fearful behaviors and tendencies is complicated, requiring as complicated solutions as the problems are complicated. And, change does not happen over night.

I had a great time with my son this Mother's Day. I learned he is extremely knowledgeable about guns and gun safety. He taught me a lot. I am so proud of the good man he has become. As a mother, I will continue to gently reinforce his inner strength which has no need for guns. That inner strength is the source of all personal power. Maybe if I am successful in getting my son to believe this truth someday, he will have no further need to carry a pistol on his hip. I hope he will take me more often to the gun club. Next time he said he'd bring his rifle. I really like shooting rifles.


Posted by Kathy Crowley-Gardner at 9:47 AM No comments:

Kathy Crowley-Gardner
I retired over a decade ago, and have spent my time exploring the next phase of my Life. I began by blogging and moved into traveling with my husband and writing a children's book series called Logie Bear & Friends Adventures available on Amazon.com.